Scientists have long recognized that Alaska has more earthquakes than any other region of the United States and is, in fact, one of the most seismically active areas of the world. The second largest earthquake ever recorded shook the heart of southern Alaska on March 27th, 1964, with a magnitude of 9.2 (see photos below). The 1964 earthquake was slightly larger than the magnitude 9.0 Sumatra-Andaman Islands earthquake that devastated northern Sumatra in December 2004 and generated a tsunami that killed more than 280,000 people. The largest on-land earthquake in North America in almost 150 years occurred on the Denali fault in central Alaska on November 3rd, 2002, with a magnitude of 7.9. 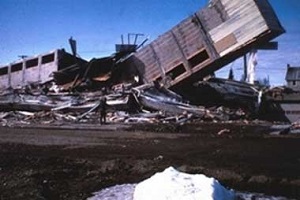 It is not possible to predict the time and location of the next big earthquake, but the active geology of Alaska guarantees that major damaging earthquakes will continue to occur. Scientists have estimated where large earthquakes are most likely to occur, and the probable levels of ground shaking to be expected throughout the state (see maps below). With this information, as well as information on soil properties and landslide potential, it is possible to estimate earthquake risks in any given area. It is also possible to estimate the potential for earthquakes to generate tsunamis, and to model the extent to which tsunamis will inundate coastal areas.

Alaska has changed significantly since the damaging 1964 earthquake, and the population has more than doubled. Many new buildings are designed to withstand intense shaking; some older buildings have been reinforced, and development has been discouraged in some particularly hazardous areas. 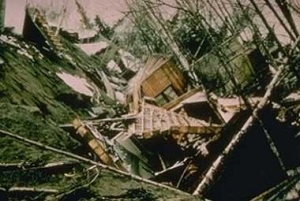 Destruction of homes in the Turnagain Heights subdivision of Anchorage during the 1964 earthquake.

Despite these precautions, and because practices to reduce vulnerability to earthquakes and tsunamis are not applied consistently in regions of high risk, future earthquakes may still cause life-threatening damage to buildings, cause items within buildings to be dangerously tossed about, and disrupt the basic utilities and critical facilities that we take for granted. 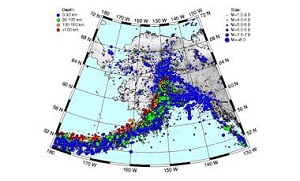 All recorded earthquakes in Alaska from 1898 to the present

The Federal Emergency Management Agency1 estimates that with the present infrastructure and policies, Alaska will have the second highest average annualized earthquake-loss ratio (ratio of average annual losses to infrastructure) in the country. Reducing those losses requires public commitment to earthquake-conscious siting, design, and construction. The Seismic Hazards Safety Commission is committed to addressing these issues. Earthquake-risk mitigation measures developed by similar boards in other states have prevented hundreds of millions of dollars in losses and significant reductions in casualties when compared to other seismically active areas of the world that do not implement effective mitigation measures. The Loma Prieta (1989), Northridge (1994) and Nisqually (2001) earthquakes caused comparatively low losses as a result of mitigation measures implemented in those areas. Many of these measures were recommended by the states' seismic safety commissions. 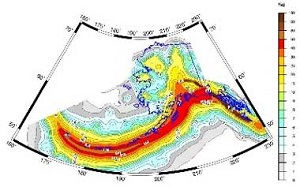 Probabilistic ground-acceleration map for Alaska. Colors depict the peak acceleration that has a 10 percent probability of being exceeded in a 50-year period.

For meeting notices and other public announcements, subscribe to our listserv.